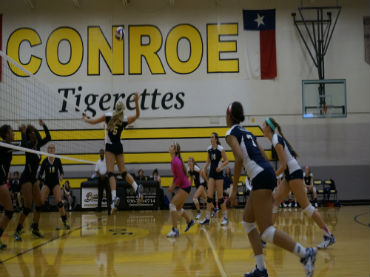 CONROE, Texas- The College Park Lady Cavaliers handled their business in the last district game of the season against the Conroe Tigers, winning in straight games; 25-17, 25-14, 25-7. The win moves College Park to 8-4 in district, good for third place and a playoff game against Klein Oak next Tuesday. Conroe finishes their season 3-9 in district.

“I thought it was a good win,” said College Park Head Coach Candice Collins. “We relaxed and played well, continued to get ready for the playoffs. We ran a lot of plays we’ve been working on, and I thought everything pretty much clicked.”

Leading the way for the Cavaliers was Emily Thorson with 16 kills and 11 digs. Kennedi Smith contributed six kills and 16 digs, while Kilee Burke had 19 assists, and Hannah Erwin had 18 assists, eight kills and six digs.

College Park started the first game in front 4-2 and looked focus. However a quick 4-1 run for the Tigerettes gave them the lead at 6-5. A Thorson drop shot evened the game at 8-8 and both teams were looking for an edge. Another Thorson kill over a block gave College Park an 11-8 lead, and the run was on. The run ended when a strong kill to the back court couldn’t be dug by the Lady Cavaliers, but the lead was up to 14-9. An Erwin ace made the score 16-9, and College Park looked good to take game one. A Macey Rabson kill that had little chance of being returned hit the court on the Tigerette side, and the lead was 18-12 Lady Cavaliers. A Smith kill to center court ended the first game in favor of College Park 25-17.

The second game witnessed Conroe jumping out to an early 2-0 lead, but it wasn’t for long. After a Rabson smash on a free ball, College Park regained the lead 3-2. The teams continued to trade points, and after a kill sailed long for the Lady Cavaliers, Conroe jumped out in front 7-6. However after a Smith ace, the Lady Cavaliers were cruising on a 4-0 run to up the lead to 10- 7. The run didn’t end until College Park had reeled off an impressive ten straight points to open up the lead in game two to 16-7. An Erwin kill moved the lead to 19-9, and all that was left was to see what the final score would be. A smart, quick drop shot to center court by Erwin made the score 24-13, and the second game ended 25-14 after a Tigerette serve went into the net.

The playoffs begin next Tuesday when College Park will take on 15-6A foe Klein Oak on the road at 5:30pm.

“Ultimately, it’s apart of their mental game,” said Collins. “When it comes to the playoffs, it’s anybody’s game. You have to make sure you continue to play strong every night, so we just have to continue practicing and getting ready. Hopefully come Tuesday when it’s the real deal we’ll be ready.”