College Park Cavaliers come from behind, claw their way to 27-24 victory over Conroe 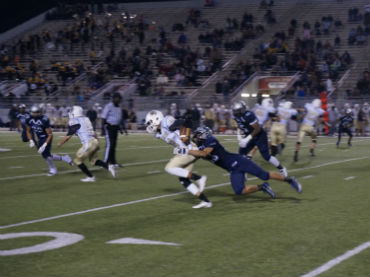 SHENANDOAH, Texas- College Park Head Coach Richard Carson has said all season that his football team would be fighting for a playoff spot the last week of the season, and his foresight turned out to be accurate. His team took care of business, coming from behind tonight to upend the Conroe Tigers, 27-24, at Woodforest Stadium. With a Kingwood loss tomorrow to The Woodlands, the Cavaliers will be playoff bound.

“Our kids did what they’ve done all year,” said Carson. “They were resilient, they fought till the end….there was no magic bean, no magic plays, it was just coming out and executing. Our kids did a great job of not quitting. I’m so proud of them I can’t put it into words.”

Leading the way for College Park was A.J Sanders, who rushed for 150 yards and two scores, including a momentum changing 57-yard score late in the fourth quarter. Dominic Garcia tacked on 58 yards rushing, and Dane Nichols added 46 yards and a score. Quarterback Robert Ferguson threw for 30 yards and ran for another 63 yards. College Park had 347 total yards of offense in the game.

For the Tigers, quarterback Colby Kizzie threw for 175 yards and two scores, and running back Thomas Shirer added 99 yards on the ground. Wide receiver DeeMarcus Jackson caught eight balls for 87 yards and a score in the loss. Conroe tallied 299 yards of total offense in the game.

Conroe (3-7, 0-6) won the toss but deferred to the second half, so College Park got the first possession of the contest. Conroe tried a pooch kick but it didn’t work, as College Park picked it up and ran it into Tiger territory to the 43-yard line. On the first series of the possession, a third-and-9 play witnessed Ferguson keeping the ball on an option and bursting through the defense for a 25-yard scamper to get the ball to the 22-yard line. Conroe’s defense stiffened after the run, and forced a 35-yard field goal attempt, which was successful by kicker Zachary Collins, to make the score 3-0 College Park with 9:01 left in the first quarter.

The next possession for College Park (3-7, 2-4) started back at their 8-yard line after a Conroe punt pinned them deep in their territory. The Cavaliers tried a pitch on the first play that wasn’t successful, and the fumble was picked up by Conroe defensive lineman Daylon Jefferson. He returned the fumble for six yards and a defensive touchdown, giving the Tigers a quick change of momentum 7-3 lead, with 6:32 left in the first quarter.

After both teams went three-and-out, Conroe’s offense got moving again. A tough call on a third down catch that may have been incomplete, went the Tigers way, and they took full advantage of the new set of chains. A 22-yard catch followed by a 23-yard touchdown reception by DeeMarcus Jackson quickly made the score 14-3 Conroe with 30 seconds left in the first quarter.

The Cavaliers got the ball back after a Conroe punt with 10:05 left in the second quarter, and the first play was another pitch that wasn’t successful, as Conroe dove on the loose ball at the Cavalier 25-yard line and were in business again. The Cavaliers had committed three turnovers in six possessions at this point in the game.

“We killed ourselves in the first half,” said Carson. “We had some unforced errors, some turnovers.”

This time the Cavalier defense was stout, and didn’t allow a yard after the turnover. A 42-yard field goal for Conroe kicker Cordell Vogel was good, and the lead was 17-3 for the Tigers with 9:12 left in the second quarter.

Conroe got the ball back after the Cavalier score, and didn’t want to head to the locker room with just a 17-10 lead. They moved the ball down the field looking for more points. A third-and-19 pass was caught by Kelly McFarland for exactly 19 yards and a first down at the College Park 10-yard line, and they were looking for the touchdown with 24 seconds left in the half. The 13-play, 82-yard drive ended when a 9-yard touchdown pass was completed to Carlos Harrell with 13 secondin the half, to give Conroe a 24-10 advantage.

The Tigers got the ball to start the second half but quickly punted to College Park. The Cavaliers wasted little time getting back the game, highlighted by a shoe-string catch by Greg Maxie on third down to get the ball into Tiger territory. A 15-yard rush by Sanders to the end zone ended the nine-play, 77-yard drive which made the score 24-16 Conroe after the PAT midway through the third quarter.

The next several possessions resulted in a game within a game that dealt with field position, as neither team could capitalize on any momentum but wanted the short field. College Park received the ball at their 44-yard line after the Conroe punter had to go to a knee to field the ball (thus being declared down); they were quick to capitalize. On the first play of the series, Sanders cut outside and went untouched for 57 yards to the end zone. The play was followed by a successful two-point try where Garcia went outside and reached over the pylon to even the score at 24-24 with 6:01 left to play.

“Conroe did a great job. Eventually, I think we wore them down, and we found some things that were working. We knew the play we were going to run on the two-point conversion, we knew we would score on it.”

After a three-and-out by Conroe, momentum sat with College Park. Runs of 33-yards by Garcia and 16-yards by Sanders got the ball to the Tiger 11-yard line in two plays, and they were in position to win the game. The Cavaliers would be stopped on the drive, but came away with a crucial 25-yard field goal by Collins to take a 27-24 lead with 1:31 left in the game.

Conroe moved the ball on their last possession, getting the ball to the Cavalier 33-yard line, however on the last play Kizzie took a sack, and with no timeouts left, Conroe couldn’t stop the clock in time and College Park had taken the victory, 27-24.

College Park will take on Spring Westfield in the playoffs if The Woodlands bests Kingwood tomorrow. If Kingwood wins, the Cavalier season will be over, but would have ended on a note they can be proud of.