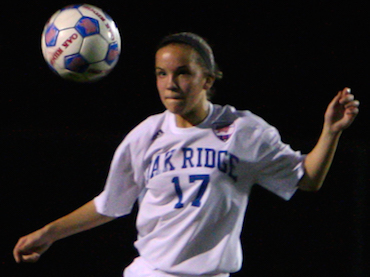 CONROE, Texas - The Oak Ridge Lady War Eagle varsity soccer team defeated the Conroe Lady Tigers on Tuesday night, proving a will to win and mastery in set plays. This game marked the beginning of the second round of districts, and gave the Lady War Eagles a 4-1-3 record that has helped them secure a spot in the top three teams in district play.

Lady War Eagle Kaitlin Alexander scored a hat trick, with all three goals due to her knowledge of placement in the situation of a set play. In addition, Alexander’s height and force behind the ball were components of success in an offensive position, allowing her an advantage over the Tiger defense.

“I feel very happy about the performance, and to be honest with you, we work on set pieces a lot, so we got three goals off set pieces- Kaitlin Alexander had three goals off of them- and we just played really well. We work on it every game day, we do corners, corners, corners, so she perfected her run, and got her head on it twice, and got the rebound,” said Oak Ridge head coach James Collins. “I liked the way we responded after we had a mistake that resulted in a goal, and I like the way we responded and got that goal back.”

The first goal for the Lady War Eagles came in the 4th-minute, in which Kaitlin Alexander headed a ball into the back of the net off of Freshman Lady War Eagle Noora Al Dossary’s corner kick. Alexander had an open, central stance in the face of the goal, and sent the ball across the face of it before a defender or the Conroe keeper could get a redirecting touch on the ball.

Conroe was not to be outdone, however, and retaliated with a goal in the 7th-minute as a result of an Oak Ridge foul. The Lady Tigers received a free kick with a central stance at the beginning of the Oak Ridge defensive third, in which the kick was directed at the Oak Ridge keeper, but was bobbled and finished by a patient Conroe forward. This brought the game to a tied 1-1 in the early stages of the game, but the Lady War Eagles were determined to come out on top at their home field.

Oak Ridge Sophomore Janneth Tello scored the second goal for the Lady War Eagles in the 9th-minute of play, picking up a through ball played by fellow Sophomore Gates Yager. Tello beat the Tiger defense and controlled the ball in an one-on-one situation with the Tiger keeper, in which she touched the ball just past the reach of the keeper and sent it into the back of the net. The Lady War Eagles did not stop there, as Kaitlin Alexander came back in the 7th-minute of the second half and scored a third goal for Oak Ridge, once again off of a corner kick from teammate Noora Al Dossary. Alexander was positioned inside the 18-yard box, and headed Al Dossary’s lofted ball past the keeper. For her third goal and Oak Ridge’s collective fourth goal of the game, Alexander yet again got ahold of a corner kick- this time played by Junior teammate Julia Zimmermann- and completed her hat trick with a forceful rebounded shot with just 6 minutes left in the game.

The Lady War Eagles brought the game to an end with a score of 4-1, harvesting hope for the second round of district play. Oak Ridge defeated Conroe 2-0 earlier on in district play, hinting at the possibility that the Lady War Eagles have become more comfortable in their own style of play and are ready to take advantage of that.

“Teams sometimes will play a little bit different the second round because they are aware of what you do and the style you play, so you just kind of have to make adjustments on the fly depending on what they do and what you see,” Collins said.

The Lady War Eagles will continue district play on Friday, February 27, at Atascocita.