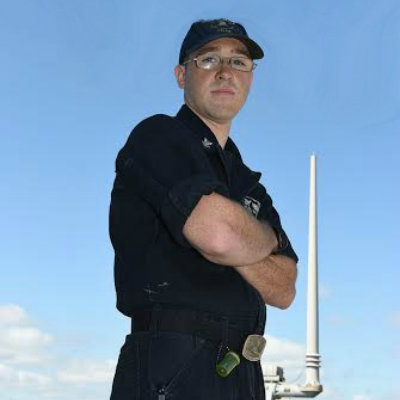 A Navy gunner's mate is responsible for maintaining and operating the ship's 5-inch gun mounts.

“I enjoy working on guns and I have the opportunity to do that here,” said Ryder.

Commissioned in May of 1992, USS Anzio measures approximately 567 feet and is powered by four gas turbines that allow the cruiser to achieve over 30 mph in open seas. Cruisers are tactical multi-mission surface combatants capable of conducting anti-air warfare, anti-submarine warfare and anti-surface warfare, as well as humanitarian assistance. Fast, maneuverable, and technically advanced, cruisers provide the required warfighting expertise and operational flexibility to execute any tasking overseas.

"I am very proud of Anzio’s numerous accomplishments during our recent eight-month overseas deployment in support of Operation Inherent Resolve,” said Capt. Frank X. Castellano, commanding officer of USS Anzio. “It takes significant teamwork and dedication to duty in order to achieve this success. Douglas was a vital member of Team Anzio who definitely contributed to our mission.”

With a crew of over 300 sailors, jobs are highly specialized and keep each part of the destroyer running smoothly, according to Navy officials. The jobs range from washing dishes and preparing meals to maintaining engines and handling weaponry.

“There is a close bond we have here especially with the guys in my division,” said Ryder. “We just got back from deployment and it was very successful.”

Challenging living conditions build strong fellowship among the crew, Navy officials explained. The crew is highly motivated, and quickly adapt to changing conditions. It is a busy life of specialized work, watches, and drills.

“Serving in the Navy for me means following in the footsteps of family who have also served,” said Ryder. “It is our way to give back to those who have gone before us.”
Stories: (2351)