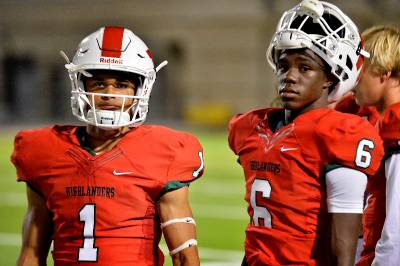 THE WOODLANDS, TEXAS – Delivering a nearly flawless performance in the first half of Friday night’s game, The Woodlands High School Highlanders wiped out Montgomery 49-0 at Woodforest Bank Stadium.

The Highlanders amassed a 35-0 lead by halftime, but even that doesn’t tell the whole story.

Of course, the most important number for The Woodlands is 9, as in 9-0. The Highlanders moved one win away from a perfect regular season record while also securing a key win over their conference rivals. The Bears (6-3) could have created a tie atop the conference standings if they’d managed to pull off the upset.

With the win, the Highlanders also guaranteed themselves home field advantage in the first round of the playoffs.

“With the region we’re in and the draw we’re in, it’s not like we’re playing someone 20 minutes away. We’re playing somebody 300 miles away,” said Highlander coach Mark Schmid. “Travel and all the things that go with travel can be an issue. To be able to make them come here is big for us.”

But before turning their attention to the postseason, The Woodlands will try to wrap up a 10-0 perfect season next week against hometown rival College Park.

“It’s always a big game with them,” said Schmid, who said you can throw out the records when these two teams meet. “We’re so close to each other, the kids go to the same churches. It’s going to be fun.”

The Woodlands didn’t waste any time finding and exploiting weaknesses in the Bears secondary. The game was two minutes old when quarterback Eric Schmid had completed three passes for 51 yards and then capped off the drive with a three-yard keeper. Lockhart West booted through the extra point – he was a perfect 7-for-7 on the night – to make it 7-0.

The Highlanders doubled their lead to 14-0 with 6:10 left in the first quarter when Christopher Stewart hauled in a 30-yard touchdown pass on a crossing route over the middle. Stewart, the Player of the Game, caught eight passes for 96 yards and two scores. And that was ALL in the first half.

Schmid had another tremendous effort, completing 16 passes for 217 yards (an average of more than 13 yards per completion) and three touchdowns. Running back Jordan Talford gained 76 yards, 43 of which came on a touchdown run late in the second quarter.

Schmid, Talford, Stewart and the rest of the team’s front-line offensive weapons saw only limited action as Coach Schmid seized an opportunity to get his reserves some valuable playing time. Grant Murphy and Quinn Binney both ran for touchdowns in the second half, and the defense stayed tough throughout to notch the Highlanders’ first shutout of the year.

“We had a lot of different people touch the football,” said Coach Schmid. “Whenever you get to do that, and when more kids get to contribute, that makes it a special night. You keep legs fresh, you reduce the chance of injury and no one is taking a pounding.”