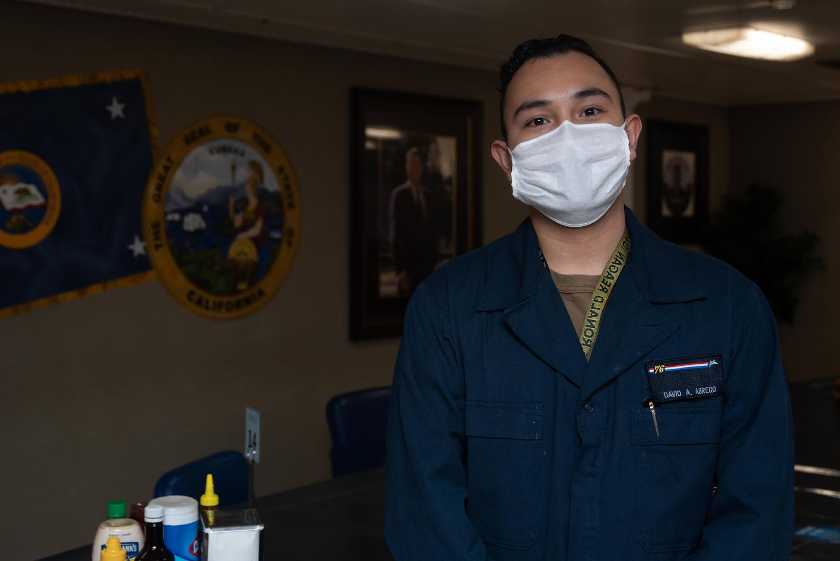 Abrego is an Culinary Specialist Seaman, and works as a Cash Collection agent in the Wardroom, tracking the mess bills of over 500 officers and assisting the records keepers in creating the menu for the two wardroom galley’s meals.

“Morale is our profession” said Abrego.

Since the ship’s Yokosuka departure in June 2020, the Ronald Reagan continues to operate in the Indo-Pacific alongside allies and partners to demonstrate the United States of America’s commitment to defense agreements, as well as provide security and stability in support of a free and open Indo-Pacific region.

In early July 2020, USS Nimitz (CVN 68) and USS Ronald Reagan Carrier Strike Groups started conducting dual carrier operations in the Philippine Sea and South China Sea. These carrier strike groups incorporate the capabilities of embarked fixed and rotary wing aircraft, Aegis guided-missile cruisers and destroyers, and attack submarines. This opportunity for two carrier strike groups to train and operate together in the region provides combatant commanders with significant operational flexibility and capabilities that only the U.S. Navy can bring.

Visit the USS Ronald Reagan (CVN 76) photo gallery for more photos and information regarding past and current operations here: https://www.dvidshub.net/unit/CVN76