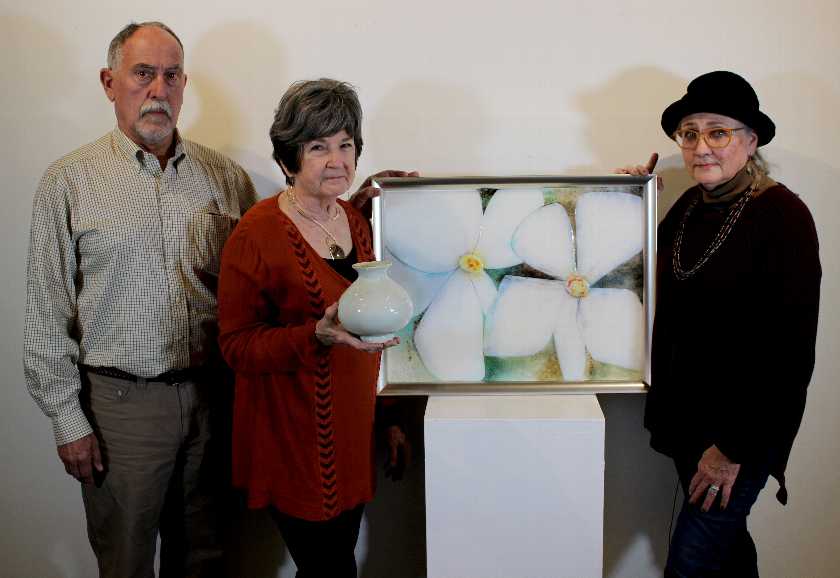 In this joint exhibition, Carol Berger, Liz Conces Spencer, and Gene Hester explore nature’s regenerative force in the face of enormous odds. The works in this exhibition reflect the artists’ concern about the impact of human encroachment, the destruction of habitats, and the planet’s survival. The eradication of plant species and diversity through human infringement and global warming, the disappearance of bee colonies and other animal/bird/insect/fish populations, and the devastation of massive pollution in the oceans, landmasses and atmosphere have engendered in each artist a response that celebrates and honors the rapidly shrinking natural world. Each artist presents works that, created solo or collaboratively, celebrate what may be lost if we do not quickly act. Even though nature has powerful regenerative abilities, it cannot withstand the onslaught of the need for humans to “grow.” Carol Berger’s works in clay along with Liz Conces Spencer and Gene Hester’s works in glass explore visual ideas using the landscape and its natural elements as starting points. Spencer additionally will present dimensional paintings on wood and traditional works on canvas.

To further support local efforts to protect Houston’s natural habitats, Archway Gallery is partnering with the Houston Arboretum &amp; Nature Center, a 155-acre non- profit urban nature sanctuary which provides education about the natural environment to people of all ages. It plays a vital role in protecting native plants and animals in the heart of the city where development threatens their survival. During the month of February, the gallery is hosting a silent auction of a work of art to benefit the conservation efforts of the Houston Arboretum &amp; Nature Center.

About the Artists:
Carol Berger has lived in a variety of places, with most of her adult life being spent in Southern California. Her art education began with her artist grandparents and various classes at the Pennsylvania Academy of Fine Arts. Berger has a double major in Art and Spanish from the College of Wooster and spent a year focusing on art history at the University of Madrid with side trips to France and Italy. After retirement from a career as a public-school teacher, Berger took a ceramics class which led to a second career as a professional artist. Currently, she teaches ceramics classes to adults and children in her studio in addition to showing her work in the Houston area. Berger draws inspiration from the designs, colors, and textures in nature. As an environmentalist and avid recycler, it is her hope that art reflecting nature will encourage other people to care for it, too. She joined Archway Gallery in 2018.

Liz Conces Spencer grew up in Pasadena, a refinery town east of Houston, and studied art at the University of St. Thomas in the early 1970’s. A Winant Clayton Volunteer in 1975, Spencer developed a summer art program in London, a placement which engendered her passion for teaching and socially collaborative work. Upon her return, she created figurative, nonrepresentational, and landscape works which led to her first major commission in 1996. She has taught continuously since the 1980’s for schools and organizations including The Houston Center for Contemporary Craft, Project Row Houses, City ArtWorks, St. Thomas High School, Incarnate Word Academy, and Young Audiences of Houston. With her husband Michael, she is a longtime resident of the Houston Heights. Spencer has worked at Mother Dog Studios in downtown Houston since the mid-1990’s. She joined Archway Gallery in 2005 and has participated in numerous exhibitions, including three solo shows.

Gene Hester was raised on a farm in the rural west Texas town of Haskell, a farming and ranching community. After studying ceramics in college, he joined the Peace Corps teaching math and science in a village primary school using the Malay language on the island of Borneo. Moving to Houston upon his return, Hester apprenticed with a glass studio, then founded Genesis Art Glass late in the 1970’s; his business specializes in fine art, commercial, residential, and liturgical glass projects. He has taught at the Glassell School of Art and Houston Center for Contemporary Craft; he has also been featured on HGTV. His expertise in ceramics and glass has cemented his reputation for artistry and craftsmanship, attracting numerous commissions. Hester moved his studio to Hockley, Texas two years ago, ending his active role as an Archway Gallery artist but has maintained professional and personal ties to the Houston art, glass, and design community. Hester and Spencer have collaborated on public and civic art projects, liturgical commissions, and gallery exhibitions since 2007 with projects in Houston, Rockport, Corpus Christi, and Plantersville. This is their first exhibition with Carol Berger.