The Woodlands Highlanders roll to 51-3 win over Conroe 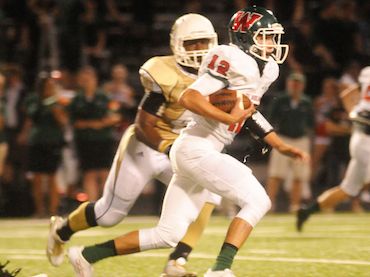 CONROE, Texas – The Woodlands Highlanders scored on a fumble return, a punt return, a long run and a short run in the first half, to cruised to a 51-3 victory over arch-rival Conroe in both teams’ District 16-6A football opener on Friday night at Moorhead Stadium.

The Woodlands has won at least a share of a district title in five of the last six seasons, and won the outright District 14-5A championship last year before falling in the regional semifinals to eventual state-champion Allen.

“Our kids really don’t think in terms like that,” Conroe head football coach Robert Walker said earlier in the week. “We tell them all the time that this is a process, and getting Conroe football back to where we want it to be.”

The Highlanders, who closed non-district play with a 24-7 win over Katy and a 49-3 victory over La Porte, opened the scoring when senior quarterback Chris Andritsos scored on a 2-yard run with 5:11 left in the first quarter. He would add a 1-yard scoring jaunt seven minutes later.

The Woodlands’ Antoine Winfield, who could be the best all-around player on the team, returned a punt 50 yards for a score in between Andritsos’ two touchdowns as the Highlanders took command in the early going and never looked back.

After Andritsos’ second score, A.J. Mason returned a Conroe fumble 40 yards for a touchdown and junior quarterback Matt Bonaguidi zigged and zagged for a 67-yard score, as the Highlanders burst to a 38-0 halftime lead.

Nacho Garcia’s 32-yard field goal with 1:16 left in the second quarter was the Highlanders’ final score of the first half.

Patrick Carr, who rushed for 124 yards, added a 66-yard scoring run to open the third quarter. He has 530 rushing yards and seven touchdowns in the first five games of the season.

Adam May rounded out the Highlanders’ scoring with a 5-yard run with 2:00 left in the third. He finished with 49 yards rushing.

“I think we’ve seen offensive improvement each week, and we’ve gone through some growing pains,’’ The Woodlands head coach Mark Schmid said before the game. “We’re not where we need to be yet, but we’re getting closer each week.”

Conroe’s only points came on Cordell Vogel’s 27-yard field goal with 11:55 left in the game.

The Woodlands played without linebacker Corey Sanders, who sustained an arm injury against La Porte.

Andritsos rejoined the Highlanders after two games and played some against La Porte. He was the starting quarterback last season and is a dual threat as a runner and passer, sporting a cannon for an arm. He is projected to be a high draft pick in the Major League Baseball amateur draft next May.

The Highlanders finished the game with 402 total yards, including 301 on the ground. Bonaguidi also had 61 yards rushing.